Pork roll is a pork-based processed meat originating and commonly available in New Jersey and parts of Philadelphia and Baltimore. It was developed in 1856 by John Taylor of Trenton, New Jersey, and sold as “Taylor Ham” 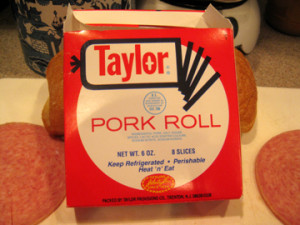 Pork roll can also be used in many recipes Case’s was reportedly packaged in corn husks
The product is generally eaten sliced and pan-fried or grilled.
Pork roll, sometimes called Taylor ham, is a kind of breakfast meat commonly available in and around the state of New Jersey.

There are many different brands of pork roll but Taylor Pork Roll is the most famous…and best!

Taylor originally called his product “Taylor’s Prepared Ham”,[4] but was forced to change the name after it failed to meet the new legal definition of “ham” established by the Pure Food and Drug Act of 1906. Marketed as both “Taylor’s Pork Roll” and “Trenton Pork Roll”, it saw competition from products with similar names like “Rolled Pork” and “Trentonstyle Pork Roll”. When their makers were sued by Taylor a 1910 legal case ruled that the words “Pork Roll” could not be trademarked. In North Jersey, residents continue to use the term Taylor Ham, while South Jersey residents generally use the term “pork roll”, with Central Jersey residents using a mix of the two.