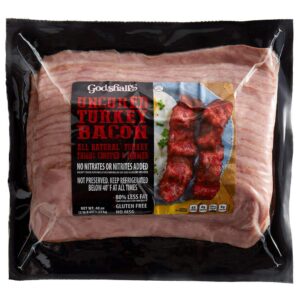 Grab a 40 ounce container of this great bacon product!!

The meat for turkey bacon comes from the whole turkey and can be cured or uncured, smoked, chopped, and reformed into strips that resemble bacon. The turkey is often cured in a mix of seasonings and refined bacon grease for up to 48 hours. Turkey bacon is cooked by pan-frying. Cured turkey bacon made from dark meat can be 90% fat free. It can be used in the same manner as bacon (such as in a BLT sandwich), but the low fat content of turkey bacon means it does not shrink while being cooked and has a tendency to stick to the pan.

Turkey bacon is lower in fat and calories than bacon, but can be used in a similar manner to bacon (such as in a BLT sandwich), but its lower fat content makes it unsuitable in some situations, such as grilling