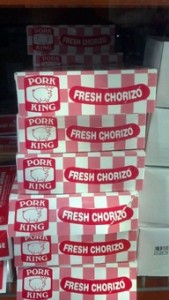 Pork King is a top rate sausage producing company in the Northeast and their Pork King Fresh Chorizo is top rated!  Try a box today!

Due to culinary tradition, and the expense of imported Spanish smoked paprika, Mexican chorizo (but not throughout Latin America) is usually made with chili peppers, which are used abundantly in Mexican cuisine.

Here’s also a great chorizo RECIPE if you decide against buying a box of Pork King Fresh Chorizo: