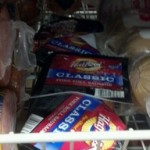 ‘Pork roll is a pork-based processed meat originating and commonly available in New Jersey, Delaware and parts of Pennsylvania and Maryland. It was developed in 1856 by John Taylor of Trenton, New Jersey, and sold as Taylor Ham.