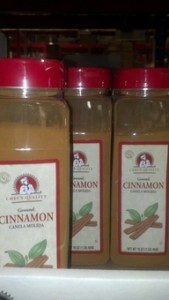 Cinnamon has a long history both as a spice and as a medicine. It is the brown bark of the cinnamon tree, which is available in its dried tubular form known as a quill or as ground powder. The two varieties of cinnamon, Chinese and Ceylon, have similar flavor, however the cinnamon from Ceylon is slightly sweeter, more refined and more difficult to find in local markets…..Chef’s Quality Ground Cinnamon

Cinnamon has an exotic, sugary aroma and a sweet taste.

Cinnamon also adds a pleasant, but unexpected complexity to tomato sauce and chocolate.